The Senior teams of the future need a pipeline of players to be produced and it is the great work of the parents, coaches, helpers and players from 4 years of age up to Minor that produce this pipeline of players.  Many nights during the summer in Coolderry you will see girls and boys of all ages training and playing on both of our pitches and in the ball-wall.

Coolderry is proud of the fact that it has made every effort to field teams in all age groups and works hard to fulfill all fixtures.  There are many, many coaches involved in making this happen along with the parents who ferry children to and from matches and training.  Coolderry GAA has teams at U8, U10, U12, U14, U16 and Minor as well as contributing players from the area to the very successful Shinrone-Coolderry U11 Community Games team.

Details of the squads, coaches and fixtures of each of the teams are provided on the various pages. 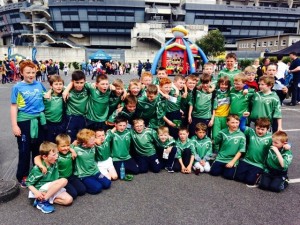