To assist in the  fundraising efforts of Coolderry GAA this year and in keeping with Covid 19 restrictions , our club players are going to run a 6km sponsored relay solo run on the roads of the parish on St Stephens Day.

We understand this year has been an unprecedented year in all our lives and we appreciate your support at this time. We have set up a gofundme page to help in our endeavors to fundraise and link can be found below.

We ask when donating to this fundraiser you drop a small comment at the end when prompted to which team you wish to donate to with each team competing to raise the most. Below is the list of team captains and their team mates.

5 easy steps. Sign up today to support your club. Check out the video here for further instructions
https://youtu.be/xB7Q4WRdH2w

Club membership for 2020 is now available online. All membership options can be sought through the below link. Simply click the link, select the option that best suits you, create a clubforce account and follow the steps to complete payment.

We thank all for using this option as it helps with administration duties within the club.

PLEASE NOTE ALL GYM MEMBERSHIP IS DUE FOR 2020 ON FEB 1ST AS ALL ENTRY FOBS WILL BE TURNED OFF ON THIS DATE IF NOT PAID. ALL GYM USERS MUST BE A CLUB MEMBER TO COMPLY WITH INSURANCE REQUIREMENTS

GAA GARDA Vetting
In line with best practice in the selection of persons to work with children, all Coolderry GAA coaches are Garda vetted and are required to attend a child protection workshop.

To get garda vetted please follow the following process:

Step 1 The initial application vetting process – Gather your information
Applicants for vetting in Coolderry GAA need to provide 2 documents which must be scanned and attached by the applicant as part of step 2 below.

The details entered will be emailed back to you, for your own records.

Our Club Secretary will also receive an email informing him/her that you have applied as a member of the club, to be issued with the NVB Vetting Application Form.

If the applicant is under 18 yrs. of age?
A parental consent form (NVB Parent/Guardian Consent Form) must be completed; all applicants between 16 and 18 yrs. of age should complete the form scan and attach.

The NVB will issue the applicant/club member with the NVB Vetting Application form, to the email address provided in Step 2.

The applicant must complete this form.

Completing this form is a confidential matter between you and the NVB. All sections of the form including current and previous addresses, email address and contact telephone numbers, information on convictions and prosecutions (if any), plus other information will be required when completing the form.

Completing this form is a confidential matter between the applicant and the NVB.  All sections of the form including current and previous addresses, email address and contact telephone numbers, information on convictions and prosecutions (if any), plus other information will be required when completing the form.Once all sections of the form have been answered, the application process for E Vetting in the GAA is complete.Within a short period of timeThe applicant shall be contacted by the GAA to inform them as to the outcome of the vetting applicationOur Club Secretary will be notified by NVB when the vetting process is complete for the applicant.The Club Secretary will notify the club Children’s Officer who maintains the information in the club vetting database

You must be vetted for GAA even if you are vetted for other organisations e.g. Rugby, Soccer

Nominations, Proposals and Motions should be submitted to the Secretary by Friday 9th November.

Coolderry GAA welcomed Lusmagh, CRC Gaels and Ballyskenagh/Killavilla GAA Clubs to Coolderry on 29th September to host the annual Fr. Christy Kennedy Cup.  Four great U11 teams lined out and played some fantastic hurling on a beautiful Saturday morning in ideal conditions.  After some very competitive matches with great skill, commitment and effort on display from all teams Lusmagh and CRC Gaels progressed to the Shield final while Coolderry and Ballyskenagh/Killavilla were set to contest the Cup final.

Two thrilling finals were played with some fantastic scores and displays of attacking and defending play.  CRC Gaels emerged as winners of the Shield final while Coolderry managed to hold off their near neighbours in the Cup final and bring the Cup back to Coolderry (after it had left for a brief holiday to Kilkenny last year!).

Thanks to all the mentors, supporters and especially the players who made the competition a great success.  Special thanks to the Kennedy family for supporting the competition which is held in honour of a great Coolderry supporter.  Oliver Kennedy was on hand to present the teams with their trophies on behalf of the Kennedy family.  Thanks also to all those who provided and served refreshments on the day. 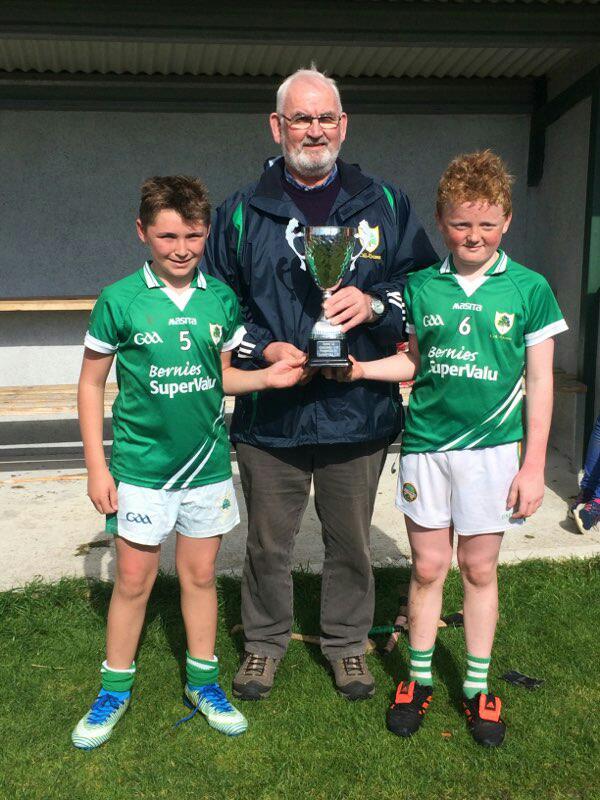 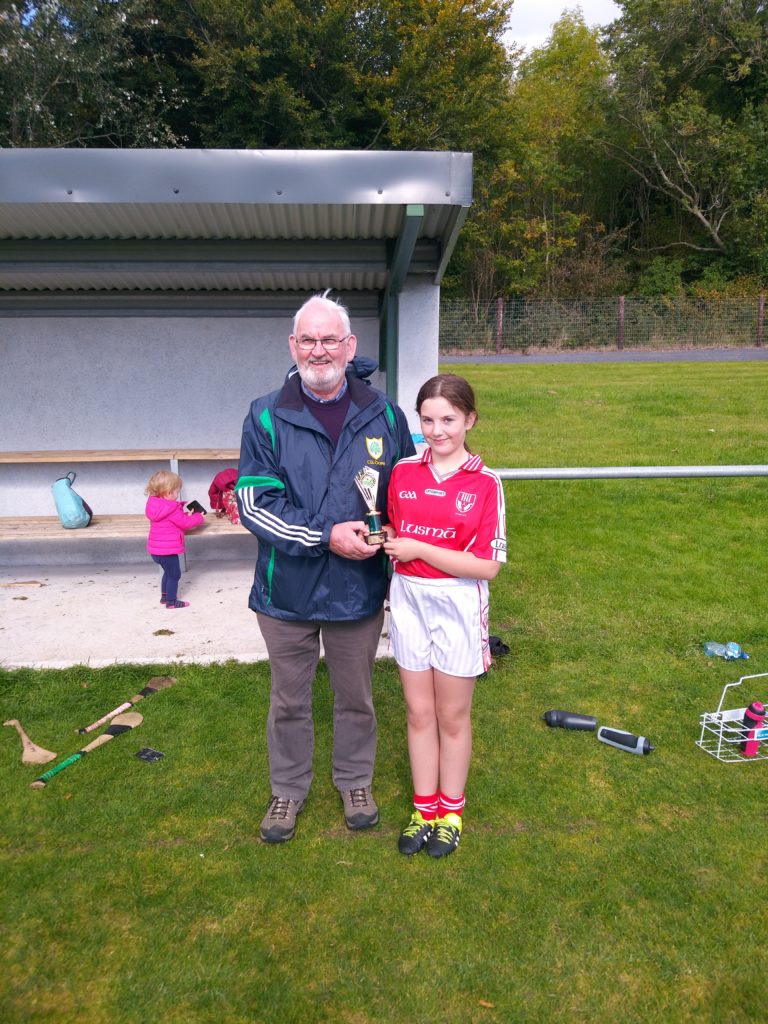 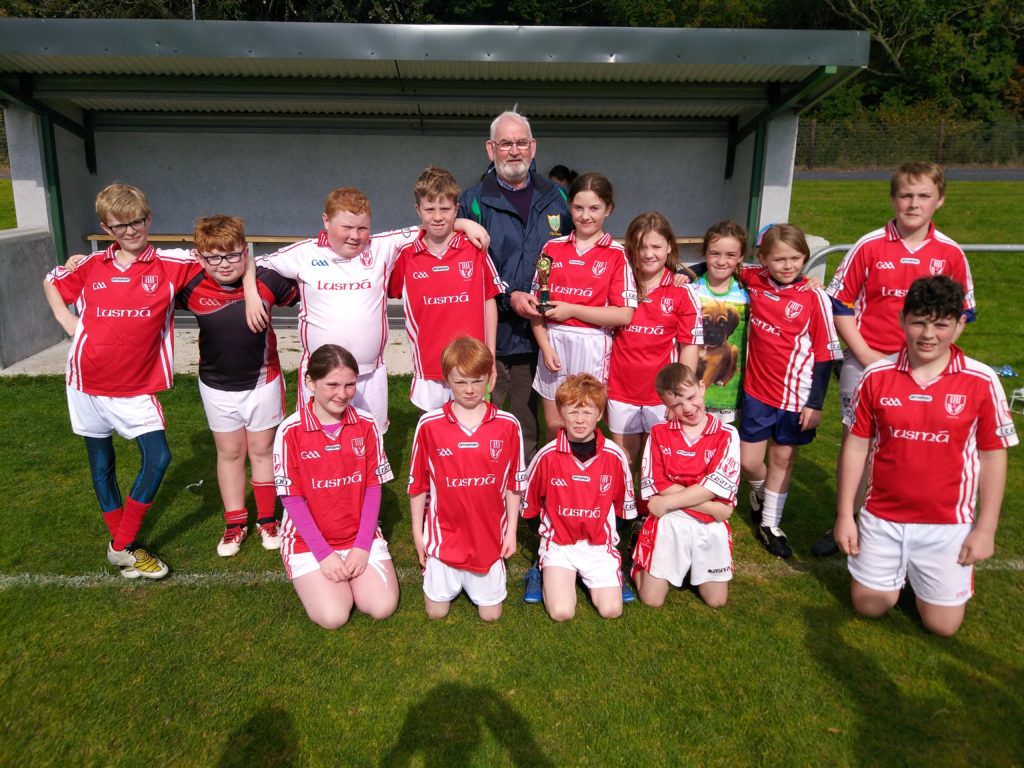 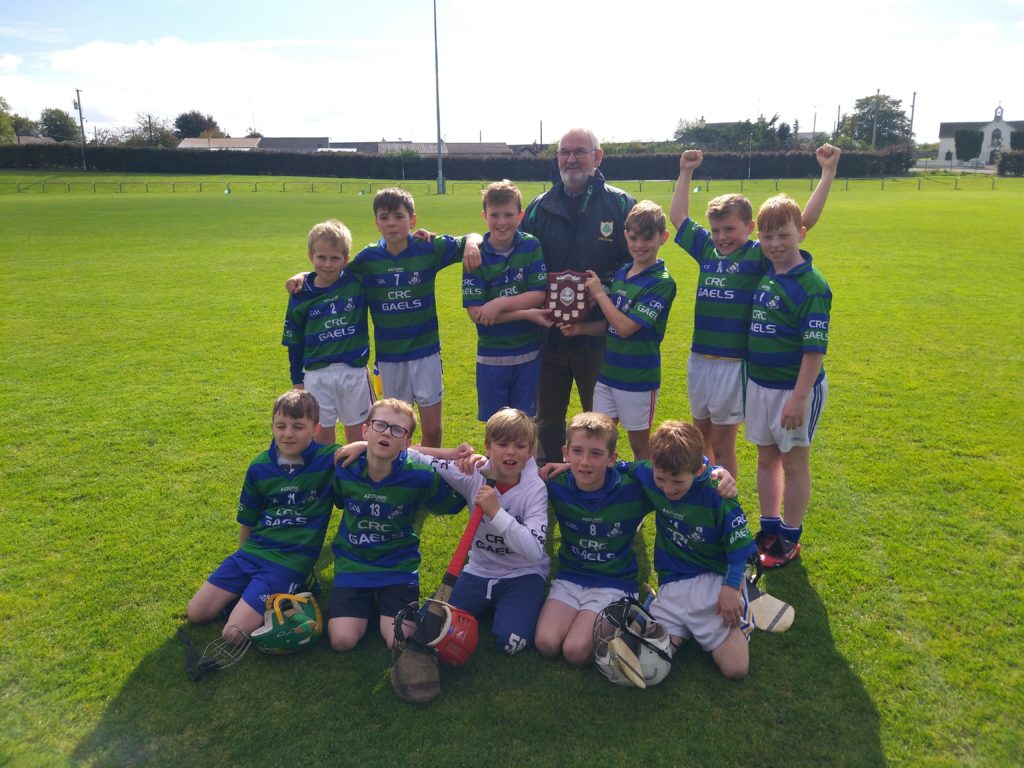 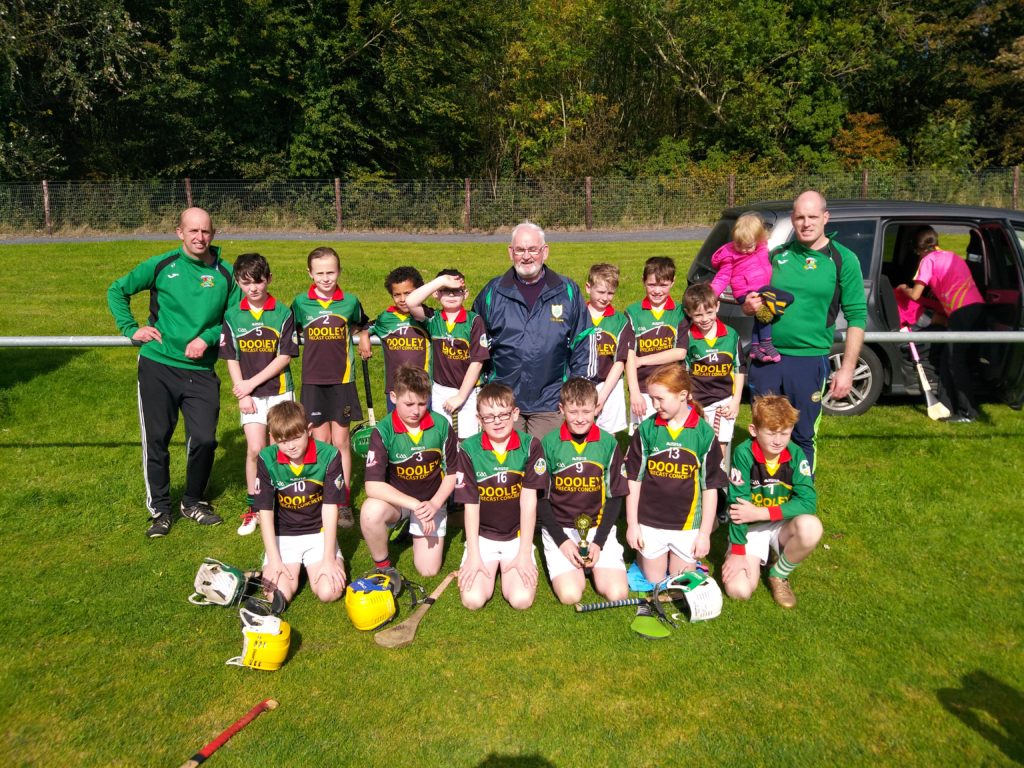 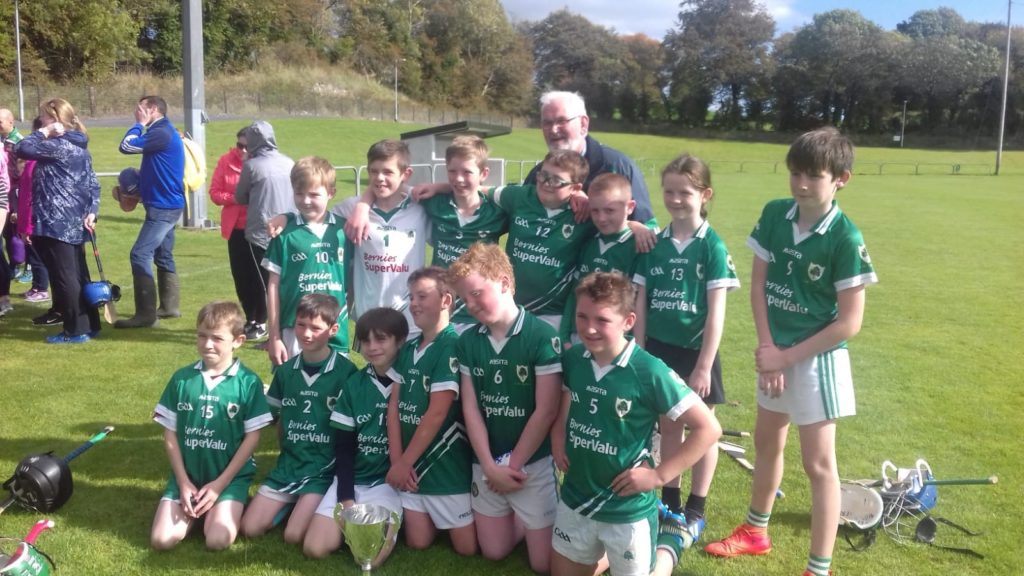 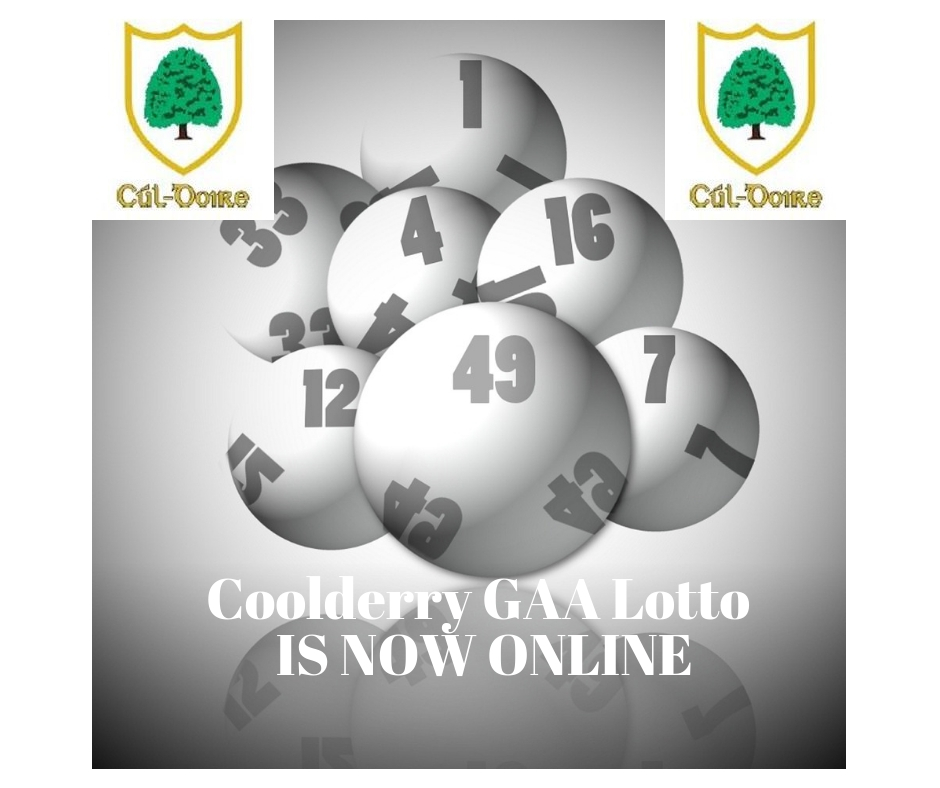 If you want to support the club but can’t get to buy your tickets in person you can now enter on-line.  Just 2 mins and you can enter for 10, 25 or 52 weeks.  Weekly emails will update you of results.  Thanks for your continued support.