Coolderry A Hurling Stronghold for over 120 years

Coolderry held a virtual monopoly on Offaly hurling during the formative years of the Association and it is tribute to the strength of those foundation stones that the game has continued to thrive in the area throughout the years.
The one sided victories associated with the club in the earlier part of the last century have passed but even so whenever the men in green reach the deciding stages of any championship they are one of the hardest sides to beat.
The Club was formed in the early 1880s and its proud tradition has been unequalled by any other hurling club within the County. The club is situated in South Offaly along the Tipperary Border and is a completely rural one with approximately 300 homes. The name of Coolderry has been associated with Offaly hurling since the early 1880s and their first victory recorded was in 1890 when the Senior hurlers of Coolderry received a trophy from the Council of the King’s & Queen’s County G.A.A. for the hurling championship of that year. That trophy still occupies a place of honour in a Coolderry home.
The first official championship win was recorded in 1899 and since that year Coolderry have won a massive 31 senior hurling titles to lead the way in the Offaly roll of honour. It is worth recording that Coolderry is the only hurling club in Offaly to have won at least one senior hurling title in almost every decade (the exception is the 1990s), surely a record of which to be proud. 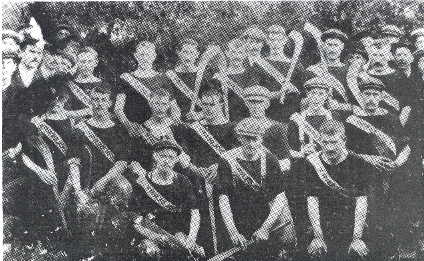 Of all the great teams that represented the club, the era of 1899 ¬1916 was probably the best, when ten senior titles were won, a magnificent achievement by any standards. But more remarkable was the manner in which they annexed these honours: in ten Championship finals, Coolderry conceded but two goals and on three occasions held their opponents scoreless, a truly astonishing defensive record. This was the era of ‘Red’ JackTeehan, Dick Jelly,T. Hernon, Mick Kirwan, Peter Connors, Dan Larkin, J. Doherty, Paddy Hanly, E. Coughlan, E. Kennedy, the Keenans & the Kennas.
In many great tussles with powerful teams from Dublin & Kilkenny, as many as ten Coolderry players featured in the Offaly line¬out. Since that era many famous Coolderry players have donned the Offaly colours, with pride and distinction.

Coolderry players have featured in all Offaly’s hurling successes with the Dooleys and Carrolls winning Leinster and All¬Ireland Junior medals with the county; while in recent years Pat Carroll, Pat McLoughney, Pat Teehan and Liam Hogan were part of the Offaly side that won the first Leinster Senior hurling title in 1980. Subsequently Pat Carroll and Liam Hogan helped Offaly to All¬Ireland success in 1981, while Pat O’Connor, John Miller, David Dooley won All¬-Ireland medals in the 1990s. Similarly Ray Dooley, Ray Deegan, David Dooley, Cathal Miller won All-¬Ireland minor medals in the 1980s.
Most recently Barry Teehan captained Offaly to a Division 2 title, with Joe Brady, Kevin Brady, Brian Carroll, Damien Murray, Cathal Parlon and Martin Corcoran also being part of that winning side.
Seven Coolderry players have won man¬-of-¬the-¬match awards in County Finals: 1977 Pat McLoughney, 1980 Pat Carroll, 1986 Noel Teehan, 2004 Cathal Parlon, 2010 Brian Carroll 2015 Kevin Connolly and 2011 & 2018 Kevin Brady.
Perhaps Coolderry’s greatest success came in the autumn of 2011 when they became the third Offaly Club to win the Leinster Senior Club title defeating Oulart-The-Ballagh in after a tremendous tussle in Nowlan Pk. Coolderry went on to defeat Gort in the All-Ireland semi-final, before going down to Loughgiel Shamrocks of Antrim in the final on St Patrick’s Day. While the club has dominated the senior hurling championship, titles in other grades were scarce until recent years when U12 A, U14 A, Minor and U21 titles were won.

As well as representing Offaly many players from Coolderry have played for Leinster with ‘Red’ Jack Teehan being the first Offaly hurler to earn recognition with the provincial selectors, while his grandson and Coolderry’s most celebrated hurler, the late Pat Carroll, was honoured by the All¬Star selectors on two occasions. Pat Carroll, Vincent Teehan and Brian Carroll all have Railway Cup winning medals.

With so many outside attractions Coolderry has held firm and with an eye to the future has purchased and developed a second playing pitch, built new dressing room facilities, constructed and developed a ball wall with astro turf covering and kitted out a fully equiped gym. The determination and spirit for which Coolderry is renowned, allied to its great tradition means that the club is prepared for the challenging
times ahead. Coolderry intends to remain THE PREMIER CLUB of Offaly hurling for many years to come.